I’ve written previously about the suite of ‘soft’ factors which underpin the accomplishment of hard results: the ‘whole universe of fuzzy people issues that increasingly determine the success or failure of efforts to implement otherwise flawless technical solutions.’

I’ve also written about evidence-based management, and the power of analytics to enhance decision-making and boost performance.

Which set me to thinking … is there a way of combining these, a sweet spot where ‘hard’ evidence-based analysis meets the otherwise intangible factors of culture, values, leadership and teamwork?

This has been on my mind for several months, and I am of the belief there’s scope for greater rigour in managing the soft aspects of organisational functioning. Analytical techniques can and are being used, for example in recruitment to help reduce staff churn. But there are other possibilities from these HR-type uses: analysis can identify what are the core drivers – the things most closely associated with – say, staff engagement. Or personality inventories can be administered to staff and the results analysed to see which staff work best together.

Revealing the Intangible Aspects of Organisations
In the meantime, we’d do well to be more rigorous about quantifying the soft aspects of organisational functioning, representing them objectively. How is an improvement in collaboration discernible? How do we know staff motivation levels have dropped? How does increased congruence with our organisation’s values make itself more apparent?

I like Douglas Hubbard’s response to this seemingly intractable set of questions. He poses a thought experiment where an organisation is cloned so that there are two identical organisations, but one of them has more leadership (or teamwork, or communication …). We compare this latter ‘test’ group to the other one which does not have the extra leadership (the ‘control’ group): how is the test group with more leadership observably different? This difference provides clues as to how to measure these intangible factors.

I recommend using a driver tree format to think this through, since there can often be interconnections between aspects. To show what I mean, below is a mocked-up example for a fictitious organisation – Acme Corporation – that wants to foster greater leadership, collaboration, and solution-focus. The logic of the driver tree is from left to right in progressively more concrete expression. Acme’s leadership team agreed that leadership, collaboration and solution-orientation were made evident in the following way: 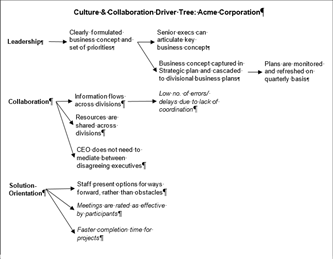 Many of these observable differences can be measured – these are italicised. Of the others, many are binary and can be captured in simple Yes/No indicators (is there a clearly formulated concept of the business or not?).

Note too that some aspects (solution-orientation) only required one step to become observable, whereas others (leadership) needed three.

The Culture & Collaboration Dashboard
But the fun doesn’t end there. (In fact it’s just beginning …).

We can portray these indicators on what I call a Culture & Collaboration Dashboard – an at-a-glance representation of key soft factors an organisation wishes to monitor and influence. Here’s what this might look like for a selection of Acme Corporation indicators once they have collected data based on their driver tree analysis:

(Click on the image above to open a larger pdf version).

Read in conjunction with the driver tree, this shows us that while Acme has a formulated business concept in place, it hasn’t been cascaded into a process that is regularly monitored at the divisional level. Making this happen is a key imperative in fostering Leadership.

Performance on the Collaboration dimension is mixed: there are large numbers of errors due to poor communication, and the CEO is very nearly spending too much time playing ‘parent’ between rival executives. Divisions are, nonetheless sharing resources. Focus needs to be directed to enhancing communication (possibly utilising the staff who are working across divisions).

Solution-orientation is holding steady: meeting effectiveness needs to be watched, but project completion time is in good shape.

We now have a first-pass at an integrated picture of ‘soft’ cultural factors; Acme can derive from this a clear set of areas in which to focus attention.

Collaborating to Define Collaboration
It’s often seen as a difficulty in dealing with soft factors such as collaboration and leadership that they are subjective and can’t be defined with the precision that, say, a person’s blood pressure can be measured. This is true: a measure of collaboration (say) is relative to how we define it, so we have to make sure our definition is as meaningful as we can make it.

However, there is an advantage lurking in this: it forces an executive team to spend the time properly defining what they understand these factors to look like. Once there is a clear and agreed definition of collaboration, the organisation can get to work establishing counting rules and collecting data.

Following that, and after some serious data collection, ambitious organisations can apply rigorous analytical techniques such as multiple regression to determine which of the factors in their driver trees have genuine explanatory power, and which are extraneous. And to relate the soft factors to the hard factors of revenue, cost, defect rates, and the like. But that’s down the track …

In the interim, I invite you and your leadership team to systematically think through what are the ‘fuzzy people issues’ on which your success depends, and then go the next step to defining, measuring and displaying them on a Culture & Collaboration Dashboard.

I would be delighted to hear your progress; if you’d like some assistance please drop me a line.

References:
Douglas W. Hubbard (2010) How to Measure Anything: Finding the Value of "Intangibles" in Business John Wiley & Sons.