HARD EVIDENCE FOR THE RISE OF EVIDENCE-BASED MANAGEMENT

Evidence-based management is on the rise: its presence is being felt in sectors as diverse as policing, e-tailing and aircraft maintenance.

It is gaining impetus because of the convergence of:

* a plethora of readily available data published by organisations (Australian Bureau of Statistics, Reserve Bank, OECD, Productivity Commission, Australian Institute of Health & Welfare to name just a few) from web-enabled devices (the Internet of Things) and social media, in addition to companies’ own internal data sets, and

* an array of rigorous, well-tested techniques for analysis and experimentation.

The only other requirements for evidence-based management to take root in in organisation are the skills to frame problems and apply the analytical techniques, and the will of leadership to set the agenda for evidence-based decision-making. 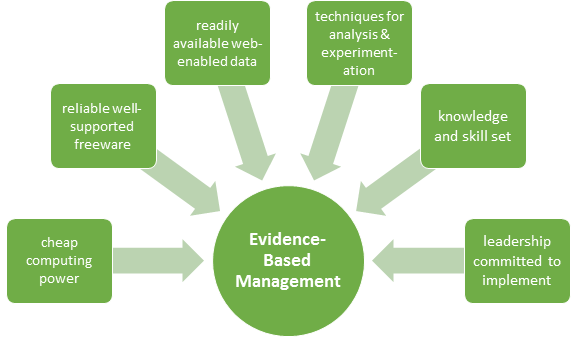 While it’s still early days, I am of the view that evidence-based decision-making is nonetheless substantially under-utilised; there are plenty more areas where it can gain a foothold.

I’m making it my business to help it do that.

Not Just Statistical Analyses
Note that evidence-based management doesn’t have to entail hard-core computing power and 27-variable regression analyses carried out to 16 decimal places. Simply providing qualitative proof such as the results of a published article that substantiate a claim about a type of organisational program, or running a short experiment against a control group to generate some comparative data all represent massive advances on blind faith, organisational politics or a mere exchange of opinions.

Three Examples of Evidence-Based Management at Work
I’ve written many articles about how organisations are applying analytics; here are three more examples to give you the feel for what we’re talking about.

(They also serve as evidence of my own claim of the burgeoning nature of evidence-based management … I aim to practice what I preach).

1. Stopping Crime Before it Happens
Predictive policing is a growing field of law enforcement increasingly being used in the US and the UK to deter crimes of a non-violent nature (especially burglaries and car theft). Data on previous crime activity is analysed and used to predict in which areas, on which days, crimes are most likely to be committed. At the beginning of their shifts, police officers are provided with maps showing particular areas (around 150 metres wide and across) – crime hot spots for that day – which they patrol to the greatest extent they can when not attending to callouts. When they’re in those areas, they make themselves as visible as possible.

These efforts at crime deterrence appear to be paying off: in one trial in California a 25 percent drop in crimes was recorded, while in another the number of non-violent crimes dropped from 50 per week to closer to 40. Importantly, these trials also use controls –randomly created boxes – so that the incidence of crime in the ‘treatment’ areas can be meaningfully evaluated.

2. Experiments for Online Revenue
Yahoo provides a nice example of what has been described in the evidence-based management literature as treating your organisation as an ‘unfinished prototype’. Yahoo runs a number of experiments on the layout of its home page: where advertisements are placed, location of buttons, etc. They found that moving the search box produced enough additional click-throughs to generate millions of extra dollars annually in advertising revenue.

3. Keeping Helicopters Airborne
Another smart use of data to improve results entails developing a mathematical model and using this to simulate various improvement scenarios. This was the approach used by the US Coast Guard (USCG) Aircraft Repair and Supply Centre in the maintenance of their fleet of medium range and recovery helicopters: the HH-60 aircraft. The HH-60 was integral to the USCG’s response to Hurricane Katrina.

The HH-60 maintenance facility had seen decreasing rates of repair: from its peak at 1999 when it overhauled nine aircraft, it had dropped to a rate of five aircraft per year by 2005. As the effects of ageing on an all metal aircraft, and the increased scope in the wake of September 11 took their toll, aircraft were remaining in the field longer, resulting in the classic maintenance vicious circle of more maintenance work therefore being required, leading to further delays in maintenance, leading to aircraft remaining in the field longer, and so on. Eventually things got to the point where 10 aircraft were in the field beyond their planned maintenance date, and there was a real risk that operational aircraft would have to be grounded.

To deal with the situation, the USCG embarked on a study to model the maintenance process to explore the most effective changes to address bottlenecks and streamline the process.

After modelling different ways to increase maintenance output, the resulting changes led to a reduction in turnaround times from more than 200+ working days down to 145, bringing with it an increase back to the nine aircraft per year level. Alongside this, the deferred maintenance burden was reduced from $23.6 million down to $6.5 million, with only three aircraft awaiting overhaul.

How You Can Utilise Evidence-Based Techniques
There are plenty of ways for you to incorporate evidence-based techniques in your organisation. Here are a few:

If you’re in Government, you will want to draw on a solid fact-base when making compelling arguments to stakeholders, such as business cases to funding departments, or presenting to lobby groups or various constituencies.

If you’re in business, you can use evidence-based management to identify cross-sell and up-sell opportunities, optimise pricing, or assess and improve the competitiveness of your cost structure.

If your organisation is not-for-profit, an evidence-based approach is a vital component of campaigning (targeting likely members and supporters) and provides a necessary plank for funding applications.

And all three sectors – Government, business and not for profits – can use evidence-based techniques to improve operational processes.

Evidence-Based Management Across the Organisation
These applications also show us that evidence-based management can occur at a number of places in an organisation:

* Higher-level strategic analysis (cost structures, pricing and competitive positioning) occur at the CEO/executive level
* Evidence-based bolstering of business cases, funding applications and benefit demonstration play out at upper and middle levels of management
* Operational and quality improvements occur on the front-line and have their initial impacts there
* Experimentation occurs at the operational coalface, and
* Retail and customer applications are carried out at front-line and middle levels.

I’ll be working on some fascinating applications of evidence-based techniques in coming months.

I look forward to sharing the outcomes with you … and helping the spread of evidence-based management at the same time.