HOW TO STOP BEING PESTERED BY YOUR STAFF

Recently, two clients of mine grumbled to me (separately) about how their staff pester them by continually coming to them, without an appointment, to talk about minor matters.

In one case the manager concerned had staff just wanting to ‘shoot the breeze’ and ventilate for a bit of senior management time and empathy. In the other, the manager had staff coming to him about comparatively trivial work affairs, but not the bigger topics they should have been discussing!

These may seem like minor annoyances in the scheme of things: the stuff a manager just has to shoulder.

But it set me thinking: are these minor annoyances symptomatic of a deeper malaise? And (especially if the answer to that question is Yes) can they be tempered?

In my experience, one or more of the following four issues are at play, and some simple remedies can help.

1. There are no systems or mechanisms for staff and management to communicate with each other
We’ve all known scenarios where we’ve sat near colleagues at work and not known what they do. Proximity doesn’t equate to knowledge. And we’re all prone to fall into the trap of thinking that because we’re occupied with something, everyone else is aware of it too.

Having a workplace where there’s a free flow of information requires a conscious effort to get information out of people’s heads, and systems or mechanisms to allow that to occur.

Remedy: establish regular team briefings. I’ve experienced and heard one too many stories about workplaces that never have staff meetings or team briefings. Don’t fall into the trap of thinking that a team briefing is necessarily a manifestation of bureaucracy: not having them creates far more inefficiency than having a meeting where necessary information flows (especially if that meeting is focussed and well-run). Just ensure they are two-way affairs where staff get to have their say (rather than a one-way ‘broadcast’ scenario).

Holding these regular staff forums makes it easier for a manager to say No and gives them somewhere to ‘park’ an issue raised by a staff member (“Can this issue wait till Tuesday morning’s staff meeting? Other people might be interested to hear the answer as well”).

Having regular staff forums where specific organisational problems can be canvassed and collaboratively resolved is a more sophisticated and high-impact version of this – GE instituted these (known as Work-Outs) under Jack Welch in the 1980s, with very positive results.

2. Work priorities aren’t clearly enough understood or communicated
Sometimes people want to chew the fat because their work profile isn’t clear, or because they have to juggle different priorities and they don’t have the confidence to decide what to work on first. So they pester the boss to get her guidance.

Remedy: develop (or recover from your bottom drawer) a strategic plan or business plan. One benefit of having a strategic plan is that everybody knows what the organisation’s priorities are and how they contribute to them … all the more so if they’ve had a chance to have input into or comment on the plan. It also provides a source of guidance when staff have to decide what to work on next.

3. The organisation is growing and maturing
Organisations that are growing from small concerns to larger ones with their own divisions have to adapt from working informally to having formal structures in place. There is pain associated with this: there is reduction in face-to-face contact and a feeling that the organisation has become more impersonal. Being interrupted by staff can be a manifestation of staff wanting personal contact.

Remedies: put in place a communication protocol or hierarchy. This is simply a procedural arrangement that spells out clearly what kinds of matters are raised with which levels of management. Typically issues are raised in the first instance with the staff member’s immediate manager.

Another approach is to select leaders and role models from within the staff who can provide support (and what I term ‘lateral leadership’) so that face-time with you, the manager, is replaced by face-time with competent peers. As you are freed up without your staff being rebuffed, there will also be the side-benefit of greater cohesion and consolidation of the team. 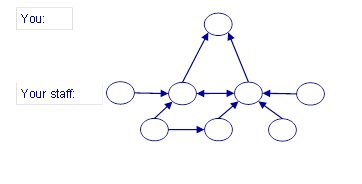 Growing pains are inevitable as an organisation matures, but if the change and its implications are openly acknowledged they can be managed. (All the more so if the associated benefits of the growth are spelt out.) As with establishing systems for communication (see point 1 above) and developing and using a strategic plan (point 2) this allows consistent thinking and practice to be replicated through the organisation.

4. Staff have been micro-managed
I’ve left the most difficult one till last. If you’re keen on maintaining ultra- high standards (read: you have some tendency towards being a control freak) you may have ‘trained’ your staff to be so dependent that they feel they need your permission to do anything. Or they may just be covering their behinds. Isn’t this at least worth considering as a possibility? Our failings as managers often reflect our failings as individuals.

Remedy: a good dose of self-awareness and candid feedback from trusted others can go a long way here, followed by a possible restructure (if you have too many staff reporting directly to you who could feasibly report to one of your direct reports). You will just need to back off, set clear expectations and monitor progress towards them, and learn to trust your staff and build their capacity to make decisions. You may want to dedicate a certain time of the week (Wednesday from 10.30 to midday, say) where your door is open and people can come and see you without an appointment.

But bear in mind, it will take time as all of you acclimatise to a more open and trusting environment and there will inevitably be glitches along the way.

Your time is scarce and is one of your organisation’s most valuable resources, so it makes sense that it be used to best effect.

What a triumph if, in doing so, you develop your organisation and your people at the same time?