FIVE WAYS TO USE KPIs TO DRIVE HIGHER REVENUES AND ENGAGEMENT

Too often have I seen performance scorecards and dashboard reports receive only cursory treatment by the organisation’s executive leadership team.

After a perfunctory glance to check for any amber or red light issues that need to be dealt with before they blow up, Key Performance Indicator (KPI) results are ‘noted’ and the senior managers move on to agenda item 17: Car Parking.

Performance: The Central Topic
This is a travesty, not because of the wasted effort in compiling the report, but because performance and results are the axis on which every organisation turns, whether business (large or small), Government, or not-for-profit. A well thought-out KPI scorecard can provide the focal point for an organisation’s management.

As Peter Drucker wrote fifty years ago, in a phrase which should be engraved over the entrance to every organisation:

An organisation is not, like an animal, an end in itself, successful by the mere act of perpetuating the species. An organisation is an organ of society and fulfils itself by the contribution it makes to the outside environment.

KPIs reflect how this contribution to the outside environment is understood and made operational.

The sort of cursory treatment described above reflects a petrification of this understanding, typically accompanied by an obfuscation of means and ends.

Unfortunately, this is not a rare or exotic condition.

[Drucker knew this; his quote above continues: “And yet the bigger and apparently more successful an organisation gets to be, the more will inside events tend to engage the interests, the energies and the abilities of the executive to the exclusion of real tasks and real effectiveness in the outside.”]

The challenge is to make the organisation’s contribution come alive again; to reinvigorate it with a renewed sense of what it is trying to accomplish, and a well-defined set of levers to push and pull to go about it.

Crystallising Performance to Improve It
Below is one means of helping you do that: I’ve made comments against a stylised performance scorecard showing how KPIs can be used to drive improved performance in terms of customer service, revenue, costs, stakeholder engagement, and staffing. 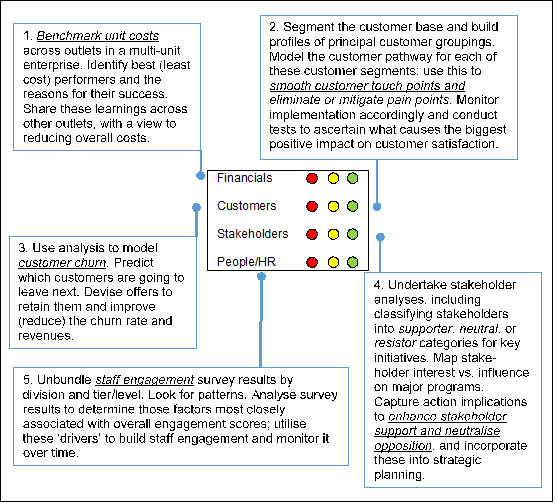 Obviously this is just one ‘take’ on what might be needed in your organisation: adapt it to the specifics of your own organisation.

Telling the Performance Story
These observations reflect my view that KPIs, instead of being treated as isolated data points should rather be woven together into a coherent narrative that explains and guides organisational action. KPI and performance reporting form one part of a continuous cycle of defining, planning, implementing, monitoring, reviewing and adjusting performance (step 4 in the diagram below):

This treatment lends itself to KPI reporting including a broader commentary explaining how organisational performance is moving over time: what interventions have taken place, what’s worked, and by how much? Month to month KPI figures are characters in this unfolding plot, rather than stand-alone grabs of information playing bit parts.

Which leads to an interesting thought: imagine your KPI scorecards are individual frames in a film that shows your performance over time. How would the colours change: where would the movement be? What would be the performance story?

Viewing your organisation’s performance holistically in this fashion is key to building a great organisation. And what a world away it is from the desultory hand waving that typifies so much corporate performance reporting.

So the question for you is: What’s your organisation’s or division’s performance story?