How many change efforts do you know of that have had a firm base of Key Performance Indicators (KPIs) measuring their progress and results? I’m betting you could count them on one hand.

Consultant and author Alan Weiss was quite right when he observed ‘One of the great weaknesses of change efforts is that they aren’t crisply measured with isolated variables and objective indicators.’

In the same way that it’s vital to make benefits concrete in a business case, it’s crucial to show implementers, senior management, staff and other stakeholders the rationale, progress and outcomes of a change effort.

Can You Measure Change?
I can hear the objections already. There are so many intangibles. This is different: it’s highly individual. This project is bespoke.

Don’t worry: I’ve heard them all before.

There are two things to say here.

Firstly, even though a change project is unique, important aspects can still be measured. As Ed Catmull, the President of computer animation film studio Pixar put it:

Because we’re a creative organisation, people tend to assume that much of what we do can’t be measured or analysed. That’s wrong. Most of our processes involve activities and deliverables that can be quantified. We keep track of the rates at which things happen, how often something has to be reworked, whether a piece of work was completely finished or not when it was sent to another department, and so on. Data can show things in a neutral way, which can stimulate discussion and challenge assumptions arising from personal impressions.

Secondly, even if those measurements are not absolute or mathematically precise, they still serve the purpose of revealing performance and enabling decisions to be made.

There is an interesting, if not overly jolly analogy here with the way decisions about property settlement are made in the family law courts. As the Family Law Handbook states:

Parties should not try to calculate contributions [of each party] with mathematical accuracy. In court, usually only broad estimates are made, and categories of contribution are offset against each other in general terms.

So even in the high-stakes environment of a family law property settlement, estimates can be made on the pathway to a final decision without absolute precision. A rough guide is enough.

The punchline: KPIs for a change effort can be derived and still be useful even if not calculated with accuracy to eight decimal places.

The Two Types of Change Metrics
With this in mind, we need to distinguish between two types of KPIs for change projects. Both types need to be accounted for.

The first type is for the change effort itself; typical metrics here include:

• degree of staff understanding of rationale for change, and acceptance of it (say, per pulse survey results)
• number of communication items distributed, and frequency of communication
• number of statements by senior management explicitly articulating support for the change
• percentage of business units with change champions/advocates embedded in them
• actual versus scheduled timeline for change project
• actual versus budgeted expenditure for change project, and
• ratings of stakeholder support.

The second type of KPI are business-as-usual (BAU) KPIs which reflect the ongoing priorities of the unit or organisation. Assuming the change effort is aimed at improving performance, there should be a demonstrable difference in measured results in some important area of organisational functioning. Examples here are standard KPIs such as:

These two types of KPI are shown below, using a change effort aimed at reducing average costs as an example: 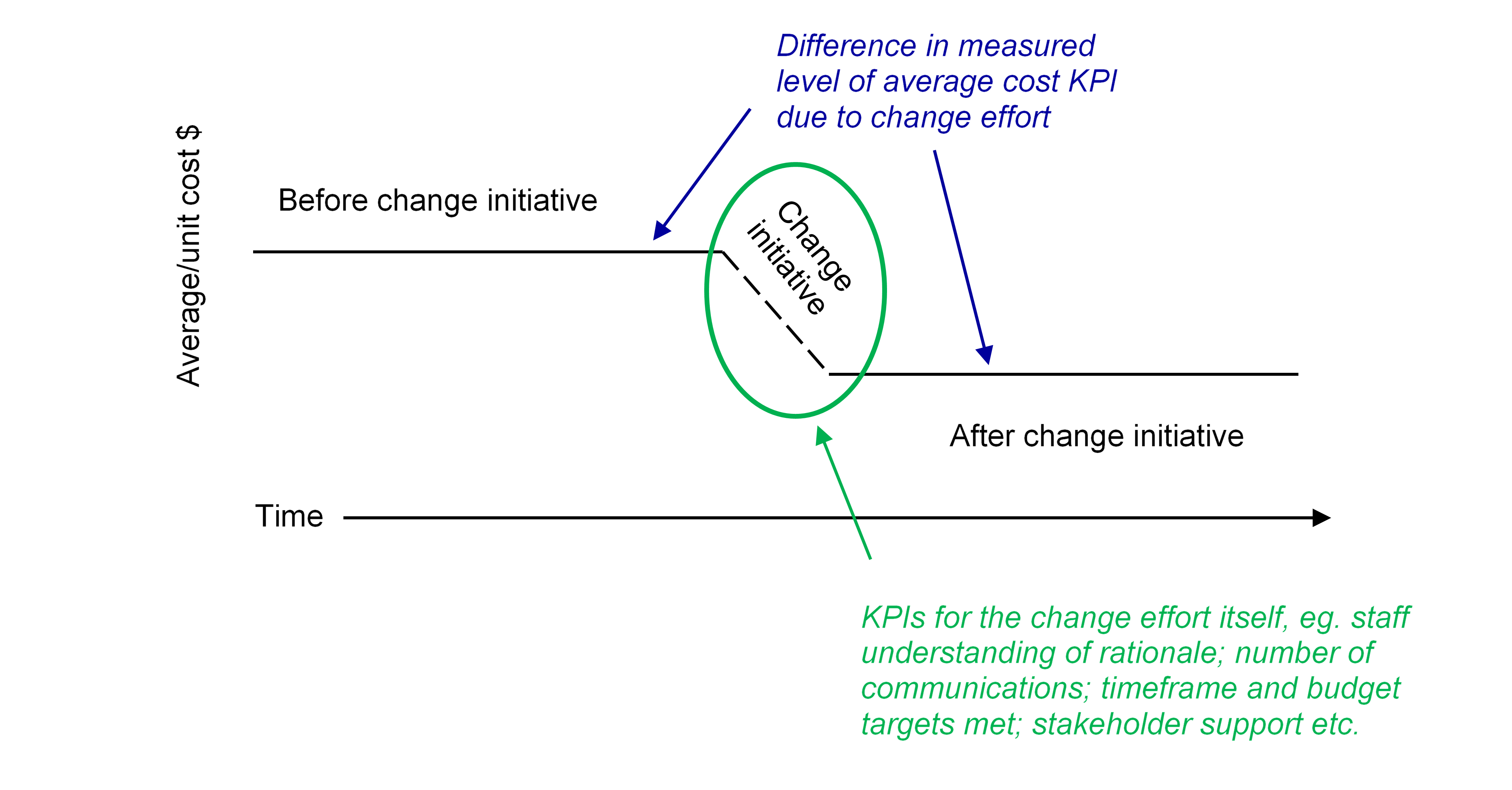 A change effort should be a means to the end of improved performance. The two types of KPI reflect how well the means are being implemented, and the effectiveness of those means in delivering the end of enhanced results.

Developing and tracking both types of KPI will give our change initiatives greater traction, durability and credibility … and that would be a worthwhile change in itself.

Consider the rudiments  of a typical organisational initiative, below:

Do you have all steps covered off in your current initiatives?

• Will the initiative lead to a demonstrable improvement in performance?
• If so, what is the expected benefit/saving? Over what time period?
• Has there been detailed action planning?
• Is implementation regularly checked against the action plan?
• How robust is the implementation? Does it have the ongoing commitment and interest of senior management?
• Have processes been properly mapped and analysed?
• Have KPIs been developed?
• Have KPIs been tracked and reported?
• How cohesive are the teams responsible for the initiative?
• Have learning and development and/or coaching been considered as part of any change effort?
• Has a post-implementation review or post-mortem been factored in?
• If a review or implementation has occurred, were the results fed back into a lessons-learned system for subsequent projects or iterations? Were adjustments made accordingly?

Too many initiatives draw blanks on too many of these questions.