How do you build alliances across organisations to achieve common ends? How can you line players up to accomplish a shared purpose?

I’ve written extensively this year about the value of power mapping for change programs and cross-sectoral collaborations. In this newsletter I apply the methodology to a real-life contemporary issue, using open source material in what I term a ‘use-case’ in power.

This use-case focuses on the campaign initiated by the welfare sector to boost the Newstart allowance by $75 per month. I have re-cast the power-interest grids: instead of ‘Interest’ being on the vertical axis (which could be either negative or positive, and which means supporters or detractors have to be colour-coded as such) the new version has Level of Support (Oppose, Neutral or Support) on the vertical axis.

Below is my power map for the current state (August 2019) of the campaign to increase the Newstart allowance. All positionings and ratings are mine. 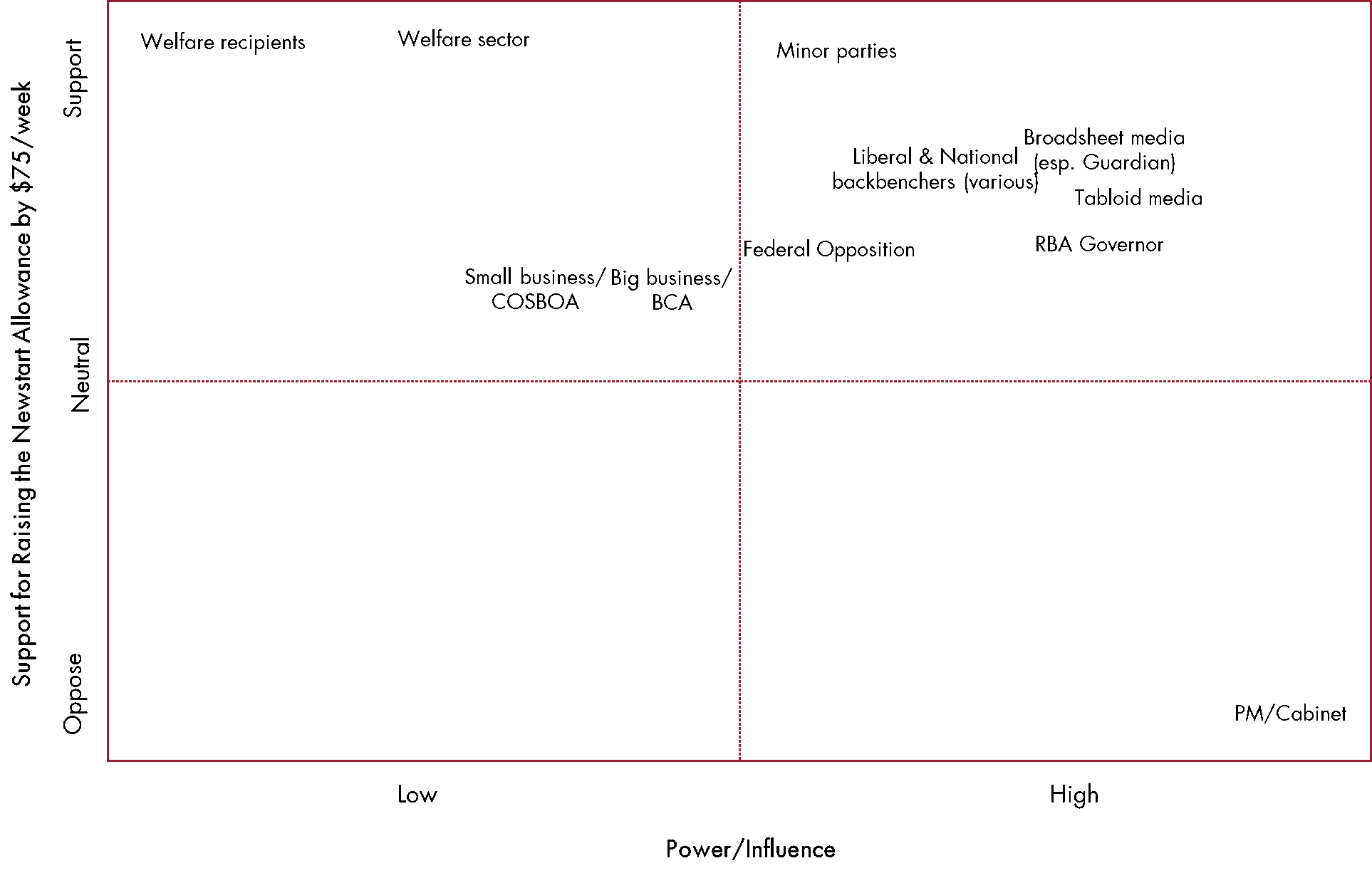 “Nice power map” I hear you say, “but what does this tell us?”

The really striking feature of this power map is that, apart from the PM and Cabinet, there is no opposition! Every other player is ‘above the line’ providing support in varying degrees to the Newstart increase: it is only Cabinet which is holding out against a broad array of stakeholders from business, politics, the media and the welfare sector. This in itself is instructive for the proponents of the campaign; it’s useful to know because it means subsequent efforts should focus on marshalling the support which is already there, rather than drumming it up.

What Next? Pathways of Power

The ultimate goal is obviously to move the PM and Cabinet to a position of support for the Newstart increase. The map below depicts this, along with a plausible set of influences to be marshalled to that effect: 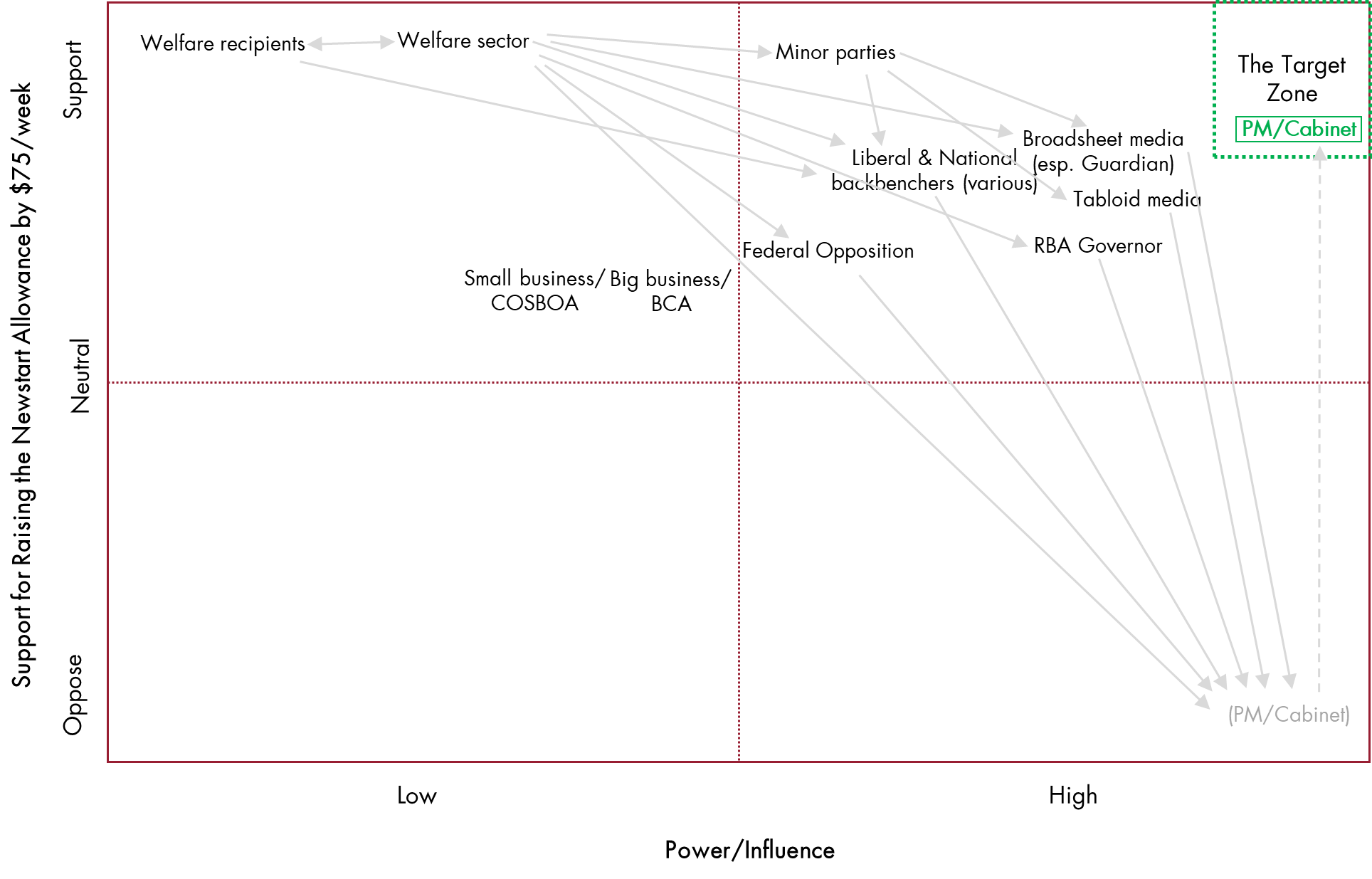 Note the ‘chain of influence’ from left to right by which the disempowered utilise the power of those who have it. This speaks to the point made clearly by one of the most prominent expounders of stakeholder analysis, John Bryson, when he wrote ‘…the knowledge gained from the use of such a grid can be used to help advance the interests of the relatively powerless’.

I see two principal sets of ‘pathways’ bearing on the ultimate decision-makers for the Newstart increase. One is from Federal Parliamentarians, encompassing the Opposition, the minor parties, but particularly from within the Coalition itself; the other pathway is from the media (both broadsheet and tabloid). Pressure could be brought to bear from both these sources in a coordinated (and sequenced) fashion to provide a continuous and ever-louder chorus of support.

This is the most potent use of stakeholder mapping: to coordinate players and build alliances across sectors for joint purpose. Mapping the stakeholders in this way also has value in shedding light on the key strategic issues confronting the campaign, which on the basis of the above would be:

This brief use-case provides clues on how to most effectively use power maps … here are three takeaways:

I hope this use-case gives you some insight into the potency and effective use of power mapping, which can also be applied for change programs, corporate social responsibility efforts, or by peak bodies and industry associations to engage their members. Expect to see more of these use-cases in coming months…