The 'Hidden Message' in Reviews of Culture & Governance

There has been increased focus on organisational culture in the past couple of years: long-time subscribers to this newsletter might recall an issue from mid-last year which pointed out that culture is the 800-pound gorilla ‘…that impaired performance and stifled change.’

That perception has only increased, in the aftermath of the banking royal commission. As recently as last week, former ACCC chairman Graeme Samuel was quoted in the financial press in a piece titled ‘Expand culture reviews to ASX200: Samuel’ as saying that ‘Boards of ASX200 companies should be required to review their own governance and culture and make the findings public…’ and that the ‘capability reviews recently undertaken by banks and insurers’ should be expanded to all ‘large listed companies’ given that the reviews have revealed ‘complacency, over-confidence and insularity.’

Well, Yes. And not just large listed companies, I would argue, but small and medium ones would do well to review their governance and culture. As would government agencies. And for-purpose (not-for-profit) organisations. In fact, who shouldn’t review culture and capability? This is the organisational equivalent of Socrates’ ‘the unexamined life is not worth living.’ Culture is vital, it’s on the agenda, and its link to performance becoming more firmly established.

All of this is markedly straightforward but for one, minor factor which is reflected in a headline from another recent piece in the financial press: ‘Board reviews are broken, directors warn.’ Here we learn of problems encompassing:

There are many factors weighing against fair and candid reviews of culture and governance, more I would suggest, than those weighing for it, which I summarise in the force-field diagram below:

The Culture Constraints to an Honest Appraisal of Culture

The ugly reality is that the factors militating against a fair appraisal of culture are the very same culture problems that such an appraisal needs to identify and help remedy! The blockages to an honest review of culture, governance and performance are the same blockages the organisation at large confronts in improving culture, governance and performance.

You can see this most clearly in a quote from the same article which cites one former senior executive who, after submitting a candid evaluation, was confronted by the chair of the board who told him “Did you forget to take your meds? I think you need to go back in and have a look at the way you answered those questions.” Yep: there’s your first culture problem right there. This kind of enforced conformity – mandated at the uppermost echelons of the organisation – stifles the flow of information and prioritises hierarchy, appearance and status over performance, results and the culture of candour and feedback which facilitate them. And since boards and executives set tone at the top, this behaviour also provides licence to everyone underneath these decision-makers (ie. the rest of the organisation) to engage in posturing, information-withholding, political second-guessing, and indulging in palace intrigue. Good luck with that.

When these problems stem from the top, I hold little hope for any remediation in the short-term. Leadership is the foundation for performance; it defines the values and spirit of the organisation. The culture problems of leadership will pervade the organisation at large: the best one can hope for when there is opacity at this level, are band-aids and palliatives. There won’t be a change in culture until there’s a change in leadership.

The Hidden Messages in Culture Reviews

One organisation I worked for many years ago had a full-scale system of 360-degree reviews. But the way the system played out (which I take as a form of ‘meta-data’ about an organisation … a ‘hidden message’) revealed more about the organisation than the content of the reviews themselves: the underlying level of trust was so low, and the level of indifference to results so high, that people spent their time trying to work out which anonymous reviewer said which nasty thing about them. The peer-review system was an institutionally sanctioned means to take pot-shots at those managers you didn’t like. Again, good luck with that.

(And if there are no review processes in place, that says something in itself…).

If you’d like a hand with any of these issues I am – as always – ready to assist. Your correspondent is a full member of the Australian Evaluation Society, and a fully prequalified NSW Government supplier of Business Performance Reviews.

(Unless you want me to). 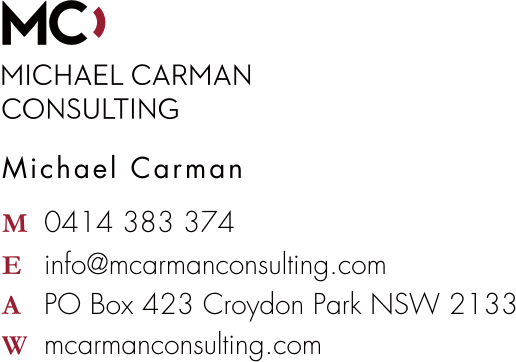 P.S. Still need convincing of the value of one of my consulting interventions? Here’s what one client said last month:

" We recently worked with Michael where he facilitated a workshop for our executive team and board members. He led the workshop and managed to keep us on track, which is an art when you have a room full of passionate people, with much to say. Also, importantly he challenged us to focus on the outcomes we wanted to achieve in the limited timeframe of the day. His enthusiastic approach to the day kept it fun whilst achieving the required results."