Change, Stakeholders and Power: Three Thoughts for the End of the Year

Having spent quite a few years working in change management and strategy, I’ve developed some perspectives around what works and what doesn’t.

I thought I would corral some of these at the end of the year; here are three you may find useful.

1. Credibility and Legitimacy are the Goals … and Restructures, Reviews, Campaigns (and Leaks) are the Weapons to Accomplish Them

In times gone by, power and influence were exercised through military might: fiefdoms were won and lost in physical warfare where the chief weapons were cannons, muskets and sabres.

In our age of institutions and the knowledge economy however, influence is exercised not to gain physical territory but to secure legitimacy, credibility, and relevance.

And instead of muskets and sabres, the weapons used in our age are restructures, publicity campaigns, reviews, change programs and leaks. It is information and profile – rather than grapeshot and gunpowder – that are wielded now.

2. The Stakeholder Terrain is the Battleground on which Change is Fought

In Napoleon’s time wars were won by making best use of the physical terrain: whoever could use the topography to their tactical advantage would win.

In our age, by contrast, it is the stakeholder terrain which must be understood and utilised. Who are the biggest supporters of a change effort? Is support present where it is needed? Where are the pockets of resistance? How much clout do detractors have? Are there potential supporters who could be mobilised but who are currently dormant?

Moving particular stakeholders from where they are to where they need to be defines a key set of tasks for any change effort. In fact it may constitute the actual change itself: employee engagement programs for example, which aim to motivate staff to align their values and behaviours with those of the organisation, fall into this category.

You can expect to hear more from me in the new year on methodologies which visually map the stakeholder terrain, although I will foreshadow what I believe to be the technique of choice: the Power-Interest grid, on which each stakeholder is plotted according to their influence (horizontal axis) and their interest (in the political sense of the term) in the particular change or program (vertical axis). A hypothetical example of a Power-Interest Grid for a corporate implementation of an enterprise risk management program is shown below: 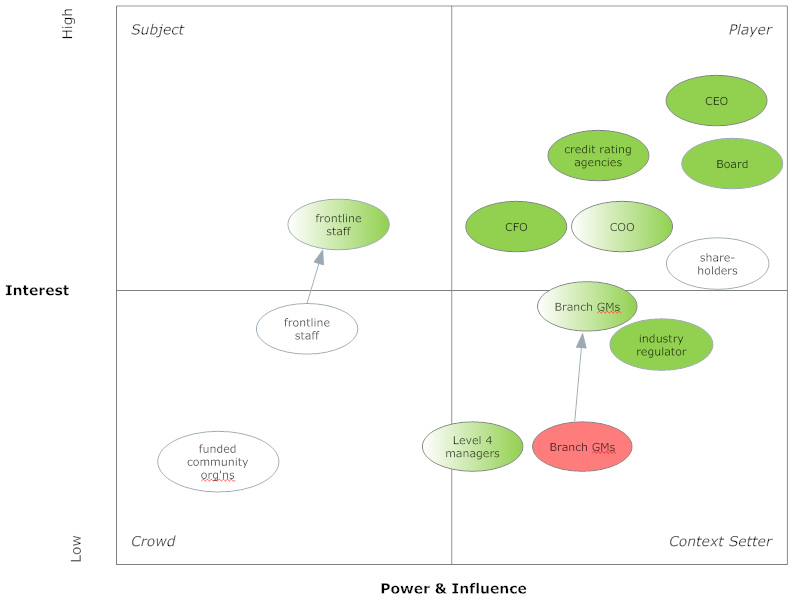 There is an array of sophisticated techniques and analyses which can be used in the service of a change effort and I will outline these in future issues. To give you the sense of this, consider…

(a) are there clusters or aggregations of support or resistance for a change program that exist, or (in the case of support) could be generated?, and

3. Keep Your Supporters Close … and Your Detractors Closer

Ideally detractors should be co-opted: the malcontent who perpetually finds fault; the sceptic who wants to locate the weak point in your program or ask the difficult question in a public forum – all these need to be won over, neutralised or isolated.

It’s tempting to want to avoid such people since being around them is so unpleasant. However this poses the risk that they can white--ant your effort without you knowing what they’re up to.

Instead, I recommend engaging with them simply to find out where their head is at, and to head off any trouble at the pass. This could be done one-to-one, but workshops and working groups are useful mechanisms for ‘drawing out the crabs’.

There is always a risk that such forums may give detractors a platform to air their grievances and win over more allies, so it’s important to prepare by:

(ii) pre-arranging supporters to also be part of these forums so that, if necessary, they can speak up at the appropriate time, and

(iii) having some vehicle for consultation into which the detractor’s complaints can be fed. The cynical version of this is the way that politicians sometimes use reviews or inquiries as a place to ‘park’ issues; however another application of this technique is to gain stakeholder input on how that program may be implemented in particular locations or divisions once the direction of a given program or change effort has been set. This gives people ‘skin in the game’ by allowing them to have input on some aspect of the program. (Recall that people support what they help to create).

A final thought: the foregoing may to some read like plotting and scheming; and I don’t shy away from it being what I term ‘applied Machiavellianism’. The end however, does not justify the means; there is little value in (to cite the words of a military commander in the Vietnam War) destroying the village in order to liberate it. My counsel on the ethical aspects of this is twofold:

1. keep ends and means in reasonable sight of each other, and

And that is a good note on which to finish this newsletter, and my communications for 2018.

Thank you for your continued interest and support. I hope this festive season brings you relaxation and renewal, and the new year brings you success and fulfillment.

In memory of Neroli Colvin